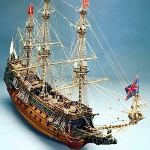 Sovereign of the Seas was the most extravagantly decorated warship

Sovereign of the Seas was launched on 13 October 1637. She was a 17th-century warship of the English Navy. She was ordered as a 90-gun first-rate ship of the line of the English Royal Navy, but at launch was armed with 102 bronze guns at the insistence of the king. She was later renamed Sovereign, and then Royal Sovereign. The ship served from 1638 until 1697, when a fire burned the ship to the waterline at Chatham.

Birth
Sovereign of the Seas was ordered in August 1634 on the personal initiative of Charles I of England, who desired a giant Great Ship to be built. The decision provoked much opposition from the Brethren of Trinity House, who pointed out that "There is no port in the Kingdome that can harbor this ship. But the King overcame the objections with the help of John Pennington and from May 1635 she was built by Peter Pett, under the guidance of his father Phineas, the king's master shipwright, and was launched at Woolwich Dockyard on 13 October 1637, as the second three-decked first-rate ship.

High cost
She was the most extravagantly decorated warship in the Royal Navy. The money spent making her, £65,586 (equal to £8,195,183 today), helped to create the financial crisis for Charles I that contributed to the English Civil War. Charles had imposed a special tax, the 'Ship Money', to make possible such large naval expenditure.

Armament
She carried 102 bronze cannon (King Charles explicitly ordered such a high number) and was thereby at the time the most powerfully armed ship in the world. The cannon were made by John Browne. The Sovereign of the Seas had 118 gun ports and only 102 guns. The shape of the bow meant that the foremost gun ports on the lower gun deck were blocked by the anchor cable. By 1642, her armament had been reduced to 90 guns. Until 1655, she was also exceptionally large for an English vessel; no other ships of Charles were heavier than the Prince Royal.

Reconstruction
Rear Admiral Sir William Symonds noted that after the ship's launch she was "cut down" and made a safe and fast ship. In the time of the Commonwealth of England all ships named after royalty were renamed; it was first decided to change the name of the ship into Commonwealth, but in 1650 it became a simple Sovereign. In 1651 she was again made more maneuverable by reducing upper works after which she was described as "a delicate frigate. She served throughout the wars of the Commonwealth and became the flagship of General at Sea Robert Blake. She was involved in all of the great English naval conflicts fought against the United Provinces and France and was referred to as 'The Golden Devil'  by the Dutch. By 1660 her armament had been changed to 100 guns. After the English Restoration she was rebuilt at Chatham in 1660 as a first-rate ship of the line of 100 guns, with flatter gun decks and renamed Royal Sovereign; most of the carvings had been removed.

Ship as English crown image
Pett and the Sovereign showing her gilded stern carvings depicting King Edgar as the perceived founder of English naval strength and dominion The Sovereign of the Seas was not so much built because of tactical considerations, but as a deliberate attempt to bolster the reputation of the English crown. Her name was, in itself, a political statement as Charles tried to revive the perceived ancient right of the English kings to be recognized as the 'lords of the seas.' English ships demanded that other ships strike their flags in salute, even in foreign ports. 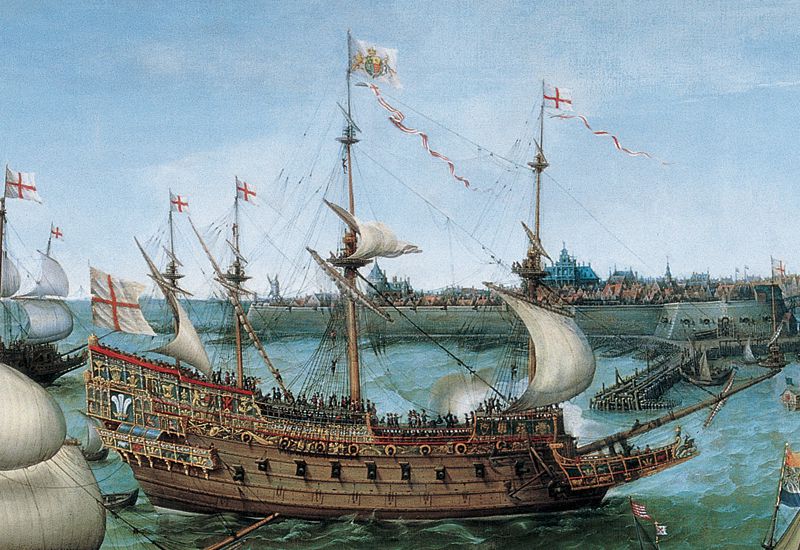 Medal on the Sovereign of the Seas
When, during the First Anglo-Dutch War, on 21 October 1652 the States-General of the Netherlands in a secret session determined the reward money for the crews of fireships that succeeded in destroying an enemy vessel, the Sovereign was singled out: an extra prize of 3000 guilders was promised 'in case they should ruin the ship named the Sovereign'. The ship had not seen action during the Civil War, remaining laid up. After refitted in 1651, during first fought in the Battle of the Kentish Knock her armament of 106 guns. She ran aground on the Kentish Knock itself. Although repeatedly occupied by the Dutch in the fiercest of engagements the Sovereign was retaken every time and remained in service for nearly sixty years as the best ship in the English fleet.
She was smaller than Naseby (later renamed Royal Charles), but she was in regular service during the three Anglo-Dutch Wars, surviving the Raid on the Medway in 1667 by being at Portsmouth at the time. She underwent a second rebuild in 1685 at Chatham Dockyard, relaunching as a first rate of 100 guns, before taking part in the outset of the War of the Grand Alliance against Louis XIV of France. For the first time she ventured into the Irish Sea, and later participated in the Battle of Beachy Head (1690) and the Battle of La Hougue, when she was more than fifty years old. In that period she was the first ship in history that flew royals above her topgallant sails and a topgallant sail on the jigger-mast.
Sovereign became leaky and defective with age during the reign of William III, and was laid up at Chatham, ignominiously ending her days, on 27 January 1697, by being burnt to the water line as a result of having been set on fire either by accident, negligence or design.
A painting from this ship survives on the ceiling of Commissioners House Chatham, over the grand staircase. It depicts an assembly of the gods and depicts Mars being crowned by Neptune, surrounded by the goddesses - Hope, Peace, Justice and Plenty. The painting is surrounded by a gilded frieze depicting sea creatures. It is attributed to Thomas Highmore.
In her honor, naval tradition has kept the name of this ship afloat, and several subsequent ships have been named HMS Royal Sovereign.

HMS Royal Sovereign launched in 1786.
She was a 100-gun first-rate ship. She was at the Battle of Trafalgar, renamed HMS Captain after being reduced to harbor service in 1825, and was broken up in 1841.

HMS Royal Sovereign launched in 1860.
She has been a 110-gun first-rate ship. She was ordered in 1833, renamed HMS Royal Frederick in 1839, then HMS Frederick William in 1860, before being launched later that year. She became a training ship named Worcester in 1876, was sold in 1948 and foundered that year.